Welcome to the WHAT THE TRUCK?!? Newsletter presented by XPO. In this issue, freight story of the year; trucker crashes during livestream; Arizona’s container wall; trucking Christmas gifts and more

Shippings’ hard landing is the freight story of the year

Two perfect — I don’t know if two headlines sum up this year in shipping better than those above about Costco. After a couple years of torrential imports, demand fell off a cliff as FreightWaves’ Henry Byers first warned back in the first week of June in the story of the year. That left retailers clinging to inventory carried in boxes that cost an astronomical $20k+ to ship from China to the U.S.

“Spot prices on global container freight continue their downward trajectory, falling for the 25th week in a row.” – ShippingWatch

It wasn’t that long ago that some experts were predicting that the next major steam ship lines would be run by retailers. Costco went from a three-year plan on chartering ships to taking $93m to exit the deal in the same year. That’s shipping. 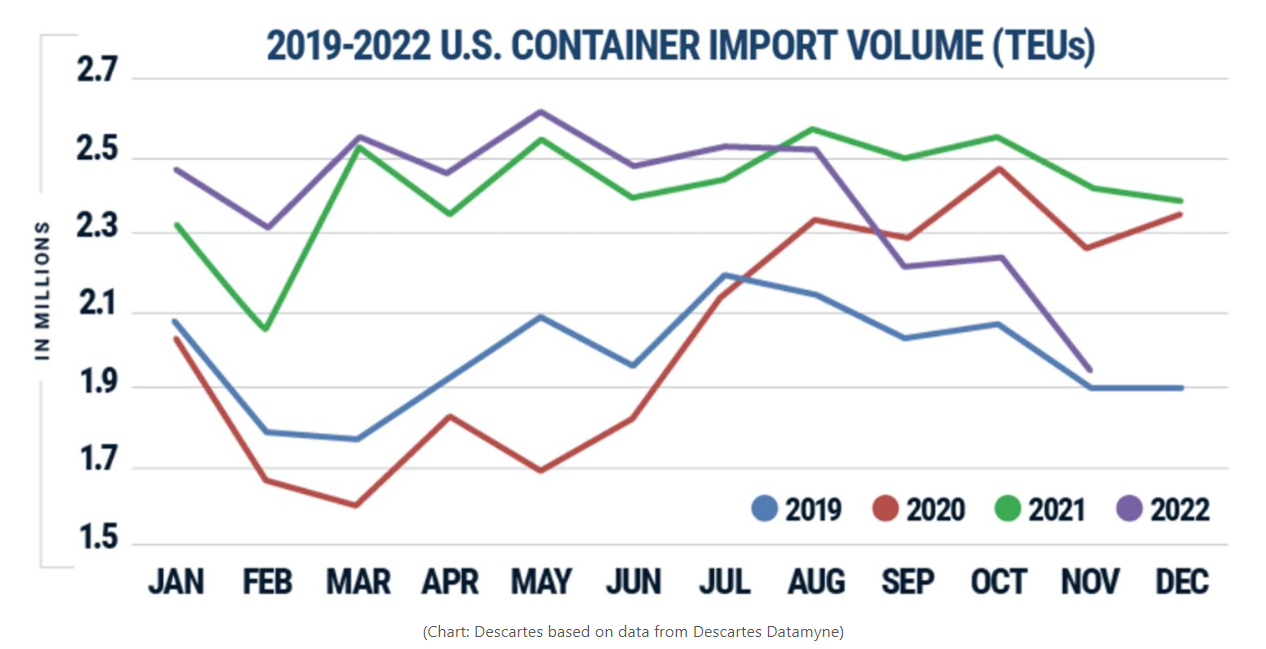 Back to reality, here comes gravity — While the SoCal ports were bleeding out, the East coast was able to make long strides in gaining market share, however Georgia Ports reported this week that they expect their vessel backlog to be cleared by January.

“I think it comes down to the market, I think you’d be remiss to mention anything but the market.” – FreightWaves founder and CEO Craig Fuller on what is the freight story of the year

Spring rebound? — This has been a tumultuous year, aside from the collapse of ocean rates you had the Freedom Convoy in Canada as the movement to shout-down mandates gained momentum, the war in Ukraine, the diesel price surge, nearly a rail strike and depressed trucking rates. Is ‘23 already doomed?

FreightWaves’ Greg Miller reports, “Jeremy Nixon, CEO of shipping line Ocean Network Express (ONE), told the press conference his company has been blanking about 20% of its sailings since October and expects to take out about half its capacity around Chinese New Year, which will be celebrated in 2023 on Jan. 22.”

Seems bad but the unmistakable stench of optimism is starting to fill the air. Both Port of Los Angeles Executive Director Gene Seroka and Ocean Network Express CEO Jeremy Nixon point towards recovery in the second half of ‘23.

They’re not alone, when Craig Fuller was on WHAT THE TRUCK?!? last week, we came to a similar conclusion.

Sound off —What’s your pick for freight story of the year? Think ocean volumes pick up in the back half of ‘23? Email me here.

Back The Truck Up  – When we launched Back The Truck Up the idea was to provide news and coverage at the surface level for truckers. To do that, we hired three truckers to cover the world in the way they see it.

It turns out, they see a lot of crazy things between the white lines including a driver who may be the first to flip his rig during a livestream (with nearly 10,000 viewers at the time!)

Insider caught up with trucker turned BTU social media scion, SuperTrucker Justin Martin, to ask if truckers crashing during livestreams is a common occurrence. He told the site, “Many companies frown upon livestreaming during work trips because god forbid something happens, and then their company logo is on the side of the truck.”

The good news is that nobody was injured. Rooster reports on BTU, “Police have reported that the trucker was not at fault on their incident report. They are searching for the driver of the red 90’s model Chevy S-10 pickup that forced the driver to take evasive maneuvers.”

Only the FEU can climb this wall

The great wall of containers?  – Last year’s major container shortage is this year’s border wall. CNN reports, “The federal government is suing Arizona for placing shipping containers at the border as a temporary wall, according to court documents filed Wednesday.” Back in August, Arizona Gov. Doug Ducey ordered the placement of boxes to fill in gaps around the state’s border with Mexico. The problem, aside from only needing a decent sized ladder to climb over the containers, is that Arizona placed the containers without proper approval or permits. Now the Federal government wants them gone but Gov. Ducey isn’t budging.

Merry truckin’ Christmas to ya

What to buy the logistics lover in your life  – Married to a freight obsessed lunatic and have no idea what to get them for Christmas? We’ll you’re in luck as BTU and TruckNews have both assembled gift guides.

Optimus Prime: Take me back to show and tell in 1985 and get me one of these bad boys. Hasbro Pulse and Robosen have teamed up to create a 19” tall self-transforming G1 Optimus Prime that can utter over 80 phrases! What chip shortage? This Prime has over 60 microchips and 27 servo motors. Only problem, the national average on rates is like $1.90 and this guy costs $999.

Hess truck for the kids: Ok, so they’re sold out as they do every year around this time but that’s no excuse. The giving of a Hess truck is an annual tradition in the House of Dooner and one I bet your kids will love. Look out for these when they drop every year in the fall, otherwise you’ll have to battle the eBay Hess truck scalpers ($125 for this year’s rig!)

For the drivers: Rooster has made his picks of the best air fryers, iPads, seat covers, boots and more that are sure to satisfy even the pickiest of drivers.

For everyone: Don’t miss WTT tomorrow as we’ll look at some of our favorite gifts from 1st Gear, TrophySmack, Ok Boomer and VIAHART.

XPO is driven to put your freight first. With coverage in 99% of U.S. ZIP codes, as well as key routes in Mexico and Canada, XPO will help you get your shipments where they need to go — on time and damage-free. It’s all fine-tuned by over 35 years of world-class LTL experience. Learn more.

A Very WHAT THE TRUCK?!? Christmas  — On Friday’s episode of WHAT THE TRUCK?!? we’re closing out ‘22 with our last and most festive show of the season. Join us as we recap the year, spread the holiday cheer, and get a good clean ass kick in the rear.

To help celebrate, I’ve invited the founders of TrophySmack, OK Boomer and VIAHART to talk about the year that was in retail ecommerce and delivery. We’ll go deep on how children’s toys, fantasy sports trophies and board games performed this year.

Plus, we have holiday messages from across the industry as we come to a close on the final WTT of the year.

Catch new shows live at noon ET Mondays, Wednesdays and Fridays on FreightWavesTV, FreightWaves LinkedIn, Facebook, YouTube or on demand by looking up WHAT THE TRUCK?!? on your favorite podcast player.

Trucking VP goes for a ride-along; here’s what he learned

Have a very Merry Christmas and a Happy New Year!

Or simply look up WHAT THE TRUCK?!? on your favorite podcast player.

All FreightWaves podcasts can also be found on one feed by looking up FreightCasts wherever you get your podcasts.

Read the latest on Back The Truck Up

Don’t be a stranger,

The post Story of the year appeared first on FreightWaves.